Air Quality in Your Home

You are here: Home1 / Homeowners2 / Air Quality in Your Home

The One Thing You Haven’t Thought About During the Quarantine 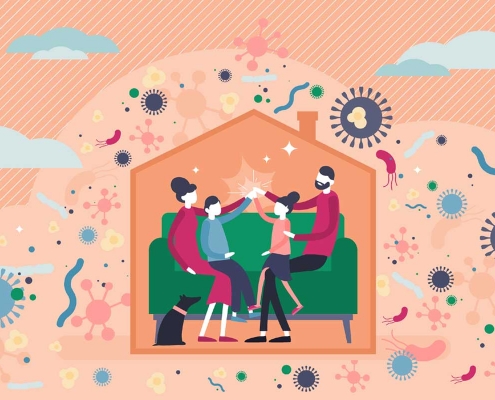 During the last century (give or take a few years) there have been four pandemic outbreaks. Most of them involve the influenza virus (commonly called the flu), the H1N1 being the most recent in 2009.

Today, it is the Novel Corona Virus, which is something, unlike anything we could have ever imagined. This virus sounds like something out of a science fiction movie, doesn’t it?
While many people are under quarantine, being told that they are “safe at home”, I think this saying should be amended a bit to something along the lines of “safer at home than in public” for example.

This is because, since the 1990s, improvements in isolation and ventilation techniques have prevented the transmission of airborne diseases, such as TB (tuberculosis) and other diseases that are spread via the air.

The COVID-19 virus is another virus that is spread via airflow. This doesn’t change because you stay inside your home. One hospital study[1] found that an aerosol spray from one room transferred to another room 14.5 meters away via the ventilation system.

You Mean I’m Not Safe at Home?
Not exactly. Most modern homes use a ventilation system whereby the outside and interior air goes through a filter before it is pumped out into the rooms of the home.

To remove pollutants, including viruses, from the air circulation in your home, you need to use a HEPA filter. Note that this will only trap the virus in the filter. It won’t kill the virus, however. Some studies suggest that the virus might be able to live as long as 9 days inside the filter, depending on temperature and humidity levels. It might be wise to spray the filter every few days with Lysol or another type of disinfecting product. You can wear a mask and gloves when changing the filter and place it in a plastic bag for disposal as an extra precaution.

Is That the Only Thing I Can Do?
There is another thing to consider, the insulation in your home.
You will need to inspect the sealing on the doors and windows, replacing or repairing them as necessary to make an airtight seal, but that is not my area.

I want to discuss the areas of your home where unfiltered air can enter your home and bring contamination in with it.

Nearly everyone is familiar with the pink fiberglass insulation. Many homes have that type of insulation in the attic, but did you know that while fiberglass traps some of the air, it mainly allows air to pass through it?

Pink fiberglass insulation acts more like an air filter in some cases, but it is certainly not a HEPA filter!

Depending on the type of walls your structure has, it could also be leaking air through tiny cracks or the floorboards on the ground level could also allow air to seep in from outside.

Spray foam insulation fills every space, nook, and cranny. No unfiltered air will be able to penetrate your home, nor will any leak outside.

The Design of Your Home Also Matters
While there is not as much evidence that ventilation will directly reduce the risk of the transmission of airborne viruses, many studies have shown that insufficient ventilation increases disease transmission.

This means that you want a good airflow into your home. However, you want the air to flow through the HVAC filter as to not allow it to enter the home unfiltered. There is a link between the detection of viruses and other pathogens in the air inside a room and the transmission of disease[2]

Some homes have better ventilation than others due to the placement of windows and the HVAC unit. There might not be much you can do about either of these things, you can seal the uninsulated portions of your home to prevent unfiltered air from entering and possibly bringing contamination with it.

The Pink Stuff Won’t Cut It
As I have said before, pink fiberglass insulation does a poor job of both insulating your home and of keeping out unfiltered air.

Spray foam insulation fills every space, nook, and cranny. No unfiltered air will be able to penetrate your home, nor will any leak outside.

This not only means that you will have a cleaner, more pollutant-free residence to enjoy, but it will also significantly increase the value of your home, not to mention, save you thousands of dollars every single year on heating and cooling costs.

While you might have heard people state that spray foam insulation is extremely expensive. I won’t deny that it costs more than fiberglass, prices have come down in the past 5 or so years. If you haven’t received an estimate lately, you should call us for a new estimate. You will probably be delightfully surprised.

Also, when it comes to price, most people find that spray foam insulation typically pays for itself in lower energy costs. An average attic and ceiling will pay for itself within 4 years and basement walls, as well as crawl spaces, will pay for themselves in 2 to 4 years.

After that, you are putting money in the bank! Not to mention the pure comfort of having a well-insulated, draft-free home that is free from unfiltered air and the possible pollutants, allergens, and viruses it carries. Imagine the peace of mind that brings. How much is that worth?
My team and I will be happy to perform an inspection and show you where unfiltered air is entering your home and where you are losing valuable heat or AC.

Call us today to schedule your appointment and get that peace of mind that is so difficult to find in today’s world.